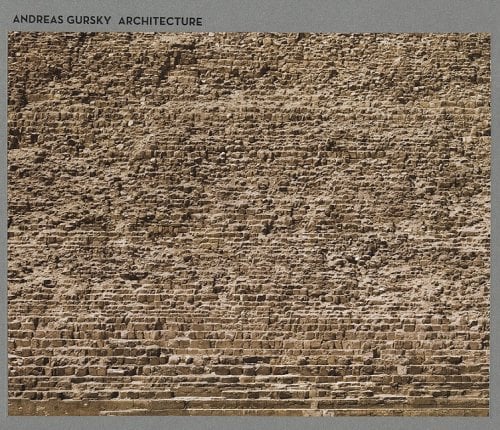 Architecture. Hatje Cantz, 2008. texte en anglais. Neuf, sous film plastique d'origine.
A cathedral of energy production in Japan meets the temples of ancient Egypt, the informal architecture of the slums, the grid-like façades of an enormous apartment complex in Paris, or the textures of nighttime light in a megalopolis. In the photographs by Andreas Gursky (*1955 in Leipzig), living environments, locations throughout our globalized world, and arenas of historical and political power are transformed into emblematic pictorial compositions.

This publication assembles about fifteen large-format works taken by the world-famous photographer between 1988 and the present. Architecture is a special focus here, a central complex of themes in the oeuvre of the Düsseldorf-based artist. For the first time, each of Gursky’s photographs is accompanied by commentary by a well-known author. The kaleidoscope of texts and images attractively demonstrates the depth and breadth of his concept of architecture, with a concentration on the structures and textures of the buildings’ exterior and interior spaces. (German edition ISBN 978-3-7757-2176-9)